I guess both Anton and I tend to work on Sundays...  He send me two nice pictures of flag shoots. 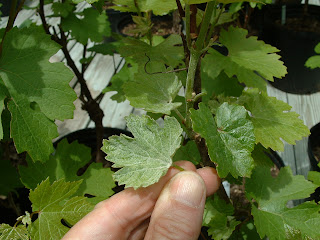 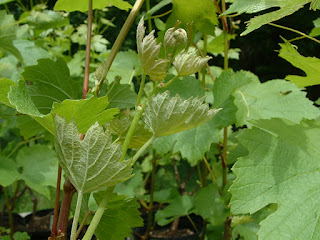 As you can see leaf surface is covered with white powder (= mycelium and spores of powdery mildew).

He also mentioned that he has used Armicarb and sulfur together and did not see any phytotoxicity.  Thus, if your intention is to fight against established colonies (whether flag shoots or late in the season), it would be a good combination.  If Armicarb or Kaligreen is too expensive for your budget, a straight sulfur application is the alternative.

The other thing about powdery mildew is the effect of cold temperature.  According to a recent study by Cornell, low temperature (8 hr of below 8C or 46F) stops the powdery mildew activities. This is another reasons why we do not see much activity of powdery mildew relatively early in the season.  Hopefully, we have enough cold (but not freezing) nights ahead of us to stop early season powdery mildew.
Posted by Mizuho Nita at 3:35 PM