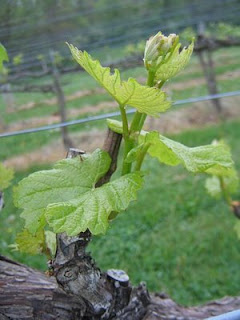 At Winchester, we had rain from 11:50am to 2:20pm (0.12 in) with starting and ending temperature of 62.3 and 67.8F, respectively. Relative humidity dropped soon after the rain and still declining at 5pm and the wind was constantly blowing at 5-10 mph, thus, leaves are probably dried one hour or so after the rain. (If the leafwetness measurement is not available, I use RH>90% as an indicator for the leafwetness after the rain.) Three hours or so was not enough for Phomopsis infection, but it was warm enough for powdery mildew ascospore discharge.

Yesterday (4/30/09), we took an advantage of a calm cloudy day and applied our first fungicide application (mancozeb 3 lb/A + sulfur 3 lb/A). Primary target at this point is Phomopsis and Powdery mildew.

Although it was either raining or overcast, average temperature in the past few days were in 50's and 60's, and grape were moving its growth stage. About 70% of our Chardonnay was 3-inch stage, and Cabernet sauvignon was about 50% with 1-2 inch stage (still variable, some are just after bud break).

March 24, 2021
Updated: Links below are for the 2021 edition of Pest Management Guides. The first one is for home gardens, and the second is for commercial productions. I asked them to provide by chapter (= crop) and they made changes. :) 1) Visit the page by clicking one of the links below. (It is rather a slow page. Please be patient.) 2) Scroll down until you see "Links to individual chapters." Grapes are chapter 3 for both Home (Home Fruits) and Commercial Crops (Grapes) 3) Once you get to the site, click "PDF", then "Preview", and it will open a new window.  4) Scroll down a bit, and click "Download Version" to download the file to your computer.  2021 Home Grounds  Pest   Management   Guide 2021 Horticulture and Forest  Pest   Management   Guide
Post a Comment
Read more

May 18, 2021
Recent cooler weather seems to have slowed down vine development, but it looks like vines in the south are about to bloom. Bloom is a start of the critical time for cluster infections by downy mildew, powdery mildew, black rot, Botrytis, and ripe rot, because pathogens of these diseases can infect flower parts and develop symptoms later. What I recommend often is the use of protective materials to protect tissues for 4-6 weeks for V. vinifera varieties, and 3-4 weeks for V. labrusca varieties, which should translate into 3-4 sprays for V. vinifera , and 2-3 sprays for V. labrusca .  If you have hybrids, they are somewhere in between, so, 4-5 weeks to be protected.  As usual, please make sure to rotate mode of action (= FRAC) groups. Since we have not seen many rain events, I think powdery mildew will be the primary target for many of us. But please check your local weather to make sure, some downy mildew susceptible cultivars may still show downy mildew, especially, if there are many
Post a Comment
Read more

June 13, 2009
At Winchester, we had light rain events during the night of 6/12/09, but it was short events and the relative humidity was low (80% or so), thus it probably did not promote any infections. However, we are experiencing continuing favorable nights for downy mildew sporulation (average T>55F, high RH (80-100%)) for 10 days now. Yesterday, we conducted a formal disease assessment, and observed first incidence of powdery mildew for this season. We had plenty of infection events in last two months, so it was not surprising. At this point, it is a trace level of infection on untreated vines. Downy mildew was the major disease so far. We had up to 40% incidence on untreated vines. Next runner-up was black rot. It varies vine to vine, but some of vine had 10-15% incidence. Phomopsis was omnipresent as I expected from early May rain falls, but severity was low overall. We will examine diseases again in the near future, and I will update as the season goes. Here is downy mildew ga
Post a Comment
Read more