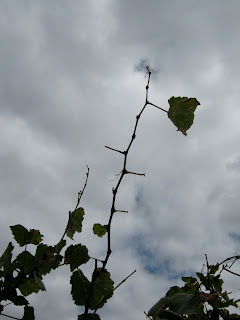 At Winchester, night time temperature in recent few days is getting pretty low to the point that relative humidity during the night is close to 100%. In addition, we are looking at a thunderstorm forecast tonight that will bring high relative humidity. These conditions favor downy mildew development because downy mildew pathogen prefers to produce spores under dark, humid conditions.

At this point, you do not need to worry about downy mildew infection on clusters; however, they can still infect leaves. Often time, you will initially see infection on the top of the canopy because younger leaves are more susceptible than older ones. Losing the top leaves and laterals are not a big deal; however, once the infection gets severe, it can defoliate many leaves rather quickly (as in the picture above), and that can affect maturing process.

As usual, it is much better and easier to have a preventative program than trying to play the catch-up game. There are many good protective materials for downy mildew, such as Revus products, Zampro, Forum (Please note that these three share the same mode of action (FRAC=45 40 (My mistake. Thank you for pointing it out!))), and Ranman (FRAC=21). In our small trial, fixed copper (FRAC=M1) worked pretty well against downy mildew when we compared with captan (FRAC=M4). Captan worked too, but a fixed copper product lasted longer than captan. Some wine makers do not like to see captan or copper used late in the season, so, this time of the season maybe the best timing to use copper and captan for downy mildew. You can also use a phosphorous acid product (FRAC=33) as well. For some cultivars, you may still use zirum (FRAC=M3) which has a 21-day PHI. Please mix and match to rotate among mode of action groups.

Downy is not the only disease you need to consider. Especially for folks in the northern VA who has been receiving more rain than the folks in the central VA, the risk of Botrytis outbreak can be high. Typically, I post end-of-the-season application tips in September, but it looks like the season is going much faster than a typical year for some of you. Thus, here is a list of fungicides with relatively low PHI (7 days or less) (a PDF file to download). I cannot cover every single fungicide out there, but I tried to cover common ones. Wine making considerations can influence fungicide uses close to the harvest too. Make sure to communicate with your wine maker(s) if they have a preference on the use of fungicides.

As I noted in the previous post, make sure to rotate mode of action for Botrytis because Botrytis pathogen is known for quickly developing fungicide resistance. I prefer to see a mode of action to be used twice or less per season, especially when we deal with Botrytis (with an exception of fungicides with FRAC code starting with "M"). This is also mentioned in the previous post, but wound management for Botrytis is important. The management of the source of wounds such as insects (esp. grape berry moth), or birds, or powdery mildew at early in the season, can result in the management of Botrytis.  Moreover, sour rot pathogens also going after wounds; so, the same wound management would be the key for the sour rot management as well.

Please leave your comment here. In order to avoid spam messages, I'll moderate comments, thus it may take a few hours for your comment to be posted on the page.