I have noticed that there are so many variations of the products, so, I listed only a few.  The other thing I noticed was that in many cases, the companies pre-mix other pesticides, such as an insecticide that you may not need.  Please make sure to read the label carefully.  Your label should have grape listed as a target host, if not, there may a reason behind it.

Oops, this one slipped out from my mind over the weekend!  I calculated the value, satisfied, and forgot to upload!

In anyway, from Friday night, we had a wetness event of 15 hours with average of 65F.  It was an infection event for downy mildew, Phomopsis, black rot, and Botrytis.

Most of us are probably close to the end of the critical period for cluster protection, and probably planning for (or even finished) the third cover after bloom, which is typically the last critical period spray. Hopefully, you are having a clean vineyard up until this point so that you can relax a bit after next spray!
Posted by Mizuho Nita at 9:09 AM No comments:

Some of you may remember that I was concerning about lack of diseases in our experimental vineyards at the VVA summer technical meeting ;).  Sure enough, I start to noticing a rapid development of powdery mildew on some of border vines, and downy mildew is on its way too!  It reminds me how quickly these pathogens can spread.

Some of early varieties are at bunch closure.  If you have a variety that is susceptible to Botrytis, this would be a good spray timing to deliver a material into the cluster.
Posted by Mizuho Nita at 9:28 PM No comments:

Here's some of downy mildew symptoms (on Vidal).
1) On upper leaf 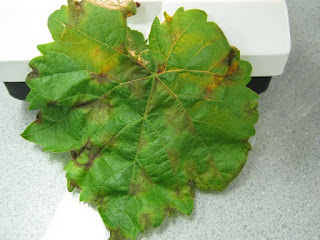 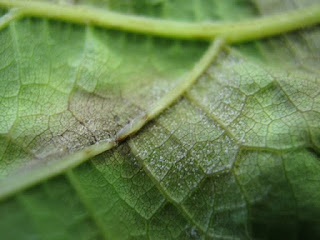 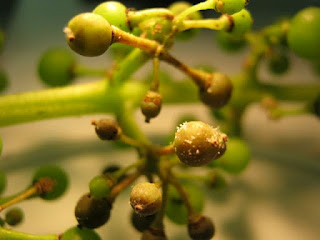 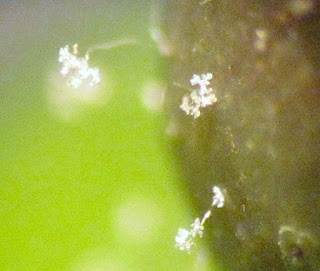 You can find more pictures of downy mildew (and other diseases) from the link listed on the left-hand side of this blog.  Click on a disease name of your interest, and it will bring up past posts about the disease.

Winchester area received quite a bit of precipitation (1.4 inches) from a series of rain event starting from the 11th of June.  We had two wetness periods 14 hours with 69F and 12 hours with 66F.  These were risk events for downy mildew, Phomopsis, black rot, and Botrytis.

We have been rating diseases in our treatment plots for three weeks now.  So far what I see most is downy mildew and a little bit of powdery mildew and black rot.  It makes sense to me to see many downy mildew infections due to recent wetting events and relatively humid nights we had in latter part of May.  I have heard from some growers that they have issues with downy on leaves and clusters.

If you have an issue with downy mildew or concerned about the risk from recent rain event, both Ridomil and Phosphonate (Phosphorous acid) products have a kick-back activity (= able to stop on-going, but not established, infection).  Since resistance against Ridomil products is known to develop among downy mildew pathogens, so, if you have an on-going major downy mildew issue, it is probably better to use a phosphonate + captan (or mancozeb, if the PHI allows you) combination.
Posted by Mizuho Nita at 10:40 AM No comments:

I guess it is typical of Winchester area.  I was monitoring radar regularly for the entire afternoon, watching lines of thunderstorms moving toward northeast over many part of VA; however, our area only received rain from 7 PM to 9 PM or so (~0.6 inches).  The estimated leaf wetness period was 6 hours (RH did not stay high due to the wind) with an average temperature of 62F.  It was a light infection event for Phomopsis, and also an infection event for downy mildew.
Posted by Mizuho Nita at 5:29 PM 2 comments: