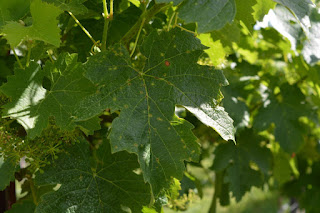 (Phomopsis leaf spot (plus a lesion of black rot), please note the shoot behind the leaf is showing some necrotic lesions which are also caused by the same pathogen)

One of the diseases you need to consider this time of the year is Phomopsis cane and leaf spot.  It causes minor leaf spots, which is more obvious to our eyes, but the more important damage is caused by necrotic lesions on shoots and rachis. It also causes berry rot; however, it is not common with wine grapes because of our spray programs. Materials for black rot and downy mildew are often effective against Phomopsis. Thus, the fungicide coverage for these diseases is also working as management of Phomopsis, especially later in the spring and early summer. Some cultivars, such as Viognier and Seyval Blanc, are more susceptible to Phomopsis than the others.

Phomopsis typically takes a while to establish in the vineyard. It may take 5-6 years for Phomopsis to become noticeable if you start a new vineyard. However, once established in a vineyard, it is difficult to get rid of this disease. The fungus survives in canes and trunks that were infected in previous years, and it can also cause damages on cordons and trunks. During the spring, it will produce spores on the surface of infected tissues, and these spores are splashed by rain onto new shoots or leaves. Luckily, the pathogen (Phomopsis viticola) produces spores mainly during the springtime. Thus, unlike the other diseases we face, there is only one major infection period throughout the season. Because of that, the spread of Phomopsis does not happen rapidly as other grapevine fungal diseases, such as downy mildew.

Phomopsis spores can cause infection under the relatively cooler environment (the upper 40s). Thus, springtime rain events are ideal for Phomopsis to produce spores and cause infection. Unfortunately, we do not have curative fungicides for Phomopsis management; therefore, it is important to protect young tissues when they come out from the older canes and trunks. Since shoots will grow rapidly, you may need to spray 1-2 times against Phomopsis, depending on how much rains we receive. 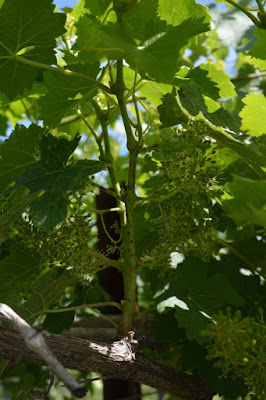 (Phomopsis can cause small necrotic lesions on shoots)

If rain events are coming into the picture after bud break, mancozeb (FRAC = M3, Penncozeb, Dithane, Manzate, etc.), Ziram (FRAC = M3), and captan (FRAC = M4) are effective protective materials against Phomopsis. In a typical year, one or two applications from 1-2 inch shoot growth will be sufficient, because your downy mildew or black rot applications, which happens in the late spring, will cover Phomopsis. QoI (FRAC = 11), such as Abound and Pristine, as well as SDHI (FRAC = 7), such as Luna Experience and Aprovia, work too. However, you probably don't want to use them this early in the season because you will need these materials for the latter part of the season to control other diseases.  Once again, protection is the only mean of chemical management because no materials are effective after the infection.

The other disease that you may need to consider around this time of the year is Anthracnose, which is more common with a certain hybrid species. Typical symptoms are black necrotic lesions on leaves,  shoots, and fruits, and often time, the black lesion has an ash-colored center, as if you burnt the leaf or shoot tissue with a cigarette. The management strategies will be similar to that of Phomopsis, and Topsin-M (FRAC = 1) is also known to be effective. For more information on Anthracnose, please refer to this link (Michigan State's Extension Website on grape Anthracnose management). 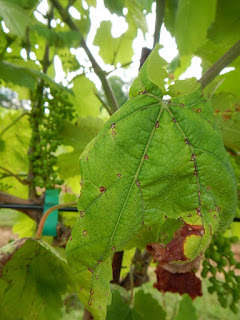 (Anthracnose lesions on a leaf)

Posted by Mizuho Nita at 1:34 PM No comments: 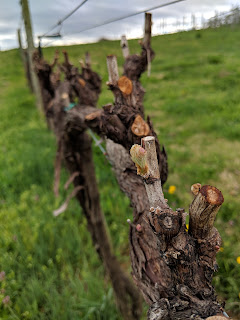 Posted by Mizuho Nita at 4:17 PM No comments:

Thank you for attending grape disease management workshops at Loudoun County Extension Office. I really enjoyed the discussions we had. I also appreciate the effort Ms. Beth Sastre puts together for organizing the meeting and translating for 4 hours!!

Click here to download the pdf of the slides I used in the workshop. I fixed some errors, but if you have any questions, please do not hesitate to contact me.

Good luck with the 2019 season!! I will update this blog as the season goes along.
Posted by Mizuho Nita at 10:16 AM No comments:

Looking for things to do on Friday afternoon? Please join our grape disease management workshop!

Here are my presentation slides from PSU grape disease and insect pest management workshop. Once again, I am looking for crown gall samples from neighboring states.  Please contact me when you have some (dying) vines to spare. I will come and get it. I am planning to visit PA vineyards this summer.

1) Late season rots (Botrytis, Sour rot, and ripe rot)
- I learned some people want to have a file with a larger side size: here is a "1 slides/page" version.

Posted by Mizuho Nita at 8:24 AM No comments: