Our reds broke buds, and whites have about 1-inch shoot growth on it today, and more rains in the weather forecast. It is time to think about Phomopsis!

What happen from this point to pre-bloom is a relatively simple spray program to manage Phomopsis, downy mildew, and powdery mildew.

During the early part of the season, I typically recommend a mix of mancozeb and sulfur or copper by itself. The reason why I recommend mancozeb now is because it works on so many different diseases (including Phomopsis which is the main target for us), plus, mancozeb has a 66-day PHI and a limit on the amount of mancozeb to be used in a year (e.g., 24 lb (or 18 lb of a.i) if you Dithane DF). Thus, I would like to use mancozeb-based product early in the season.

I have been often asked whether you should include sulfur or not. If your vineyard has a history of powdery mildew outbreak, it would be a good idea to have a sulfur in your tank mix, even at early part of the season. Although you may not able to see it, powdery mildew pathogen gets active when the temperature gets warmer. It is probably a better idea to have your vine covered than risking.

Some people prefer using JMS Stylet oil for early powdery mildew management. It works, but please keep in your mind that you cannot spray sulfur or captan within two weeks of any oil application. It will cause toxicity to grapevines.

A use of a copper-based product is not a bad idea either. It is relatively cheap and effective against both downy mildew and powdery mildew (but not much against Phomopsis). It may not as effective as mancozeb + sulfur, but it can be sufficient. Also, if you want to keep mancozeb as long as its 66-day PHI and yearly usage limit allows (e.g., you want it for ripe rot management), then copper can be a good rotation partner.

The growth of the shoots during the first several weeks is so rapid that you need to make sure that there is a good coverage before the rain. Please remember that it is much easier and more effective if you protect your vines. Once any of diseases start in your vineyard, a catch-up game tends to be not effective. I have heard from many growers that the number of application tends to be fewer if you are proactive in protecting vines. When you have kept a clean canopy and clusters until the end of the critical times for downy, powdery and black rot (I will cover this topic later), then you can relax your fungicide application program. 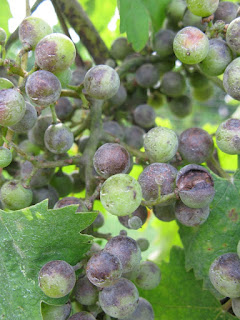 (Burning-like symptoms on berries due to fungicide applications after an outbreak of powdery mildew...)
Posted by Mizuho Nita at 8:05 PM No comments: 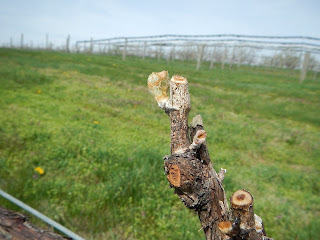 It looks like the 2017 season for us has officially begun. Our 8 years old Chardonnay at Virginia Tech's Winchester AREC was about 10% bud break as of yesterday. Despite a warm winter, a colder spring might have kept things slow (I am not complaining!)

Once again, the important disease at this point is Phomopsis cane and leaf spot. Please refer to my previous post about Phomopsis management.

Also for our Chardonnay plot, we have a chronic issue with climbing cutworms. Since we know the location of our vineyard where we always see some damages, we typically apply an insecticide to the panels of vines that is facing a wooded area. Without spraying the whole vineyard, it seems to provide adequate control.

Good luck with the 2017 season. I will post key disease management tips as the season moves along.
Posted by Mizuho Nita at 8:23 AM No comments:

Our Chardonnay and some of the hybrid vines are in bud swell stage as of this week, and others are tagging along.  It looks like we will see bud break very soon with warmer temperature coming up next week.


One of the diseases you need to consider this time of the year is Phomopsis cane and leaf spot.  It causes minor leaf spots, which is more obvious to our eyes, but the more important damage is caused by necrotic lesions on shoots and rachis. It also causes berry rot; however, it is not common with wine grapes because of our spray programs. Materials for black rot and downy mildew are often effective against Phomopsis. Thus, the fungicide coverage for these diseases is also working as management of Phomopsis, especially later in the spring and early summer. Some cultivars, such as Viognier and Seyval Blanc, are more susceptible to Phomopsis than the others. 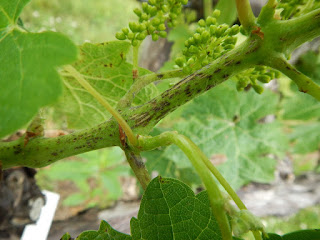 Phomopsis takes a while to establish in the vineyard. It may take 5-6 years for Phomopsis to become noticeable if you start a new vineyard. However, once established in a vineyard, it is difficult to get rid of this disease. Phomopsis tends to become noticeable as a vineyard gets older because of its life cycle. The fungus survives in canes and trunks that were infected in previous years. During the spring, it will produce spores on the surface of infected tissues, and these spores are splashed by rain onto new shoots or leaves. Luckily, the pathogen (Phomopsis viticola) produces spores mainly during the springtime. Thus, unlike the other diseases we face, there is only one major infection period throughout the season. Because of that, the spread of Phomopsis does not happen rapidly as other grapevine fungal diseases, such as downy mildew. Moreover, Phomopsis spores can cause infection under the relatively cooler environment (the upper 40s). Thus, springtime rain events are ideal for Phomopsis to produce spores and cause infection. Unfortunately, we do not have curative fungicides for Phomopsis management; therefore, it is important to protect young tissues when they come out from the older canes and trunks.

If rain events are coming into the picture after bud break, mancozeb (FRAC=M3, Penncozeb, Dithane, Manzate, etc.), Ziram (FRAC = M3), and captan (FRAC = M4) are effective protective materials against Phomopsis. In a typical year, one or two applications from 1-2 inch shoot growth will be sufficient, because your downy mildew or black rot applications, which happens in the late spring, will cover Phomopsis as I mentioned earlier. QoI, such as Abound and Pristine, as well as SDHI, such as Luna Experience and Aprovia, work too; however, you don't want to use them this early in the season because you will need these materials for the latter part of the season to control other diseases.  Once again, protection is the only mean of chemical management because no materials are effective after the infection.

Posted by Mizuho Nita at 7:00 AM No comments:

It was very nice to see you all at the Weekend Warrior Grape IPM workshop. I think we had a very good time with lots of discussions. Hopefully to see you at other meetings.

Here is a list of materials that we covered during the meeting.