A quick update: A series of rain event since 5/29 around Winchester area produced two Phomopsis infection events and one black rot infection events.  Two consecutive humid nights probably promoted downy mildew spore production too.  Things are still wet, thus I will update the length of wetness once things dry out.
Posted by Mizuho Nita at 7:37 AM No comments:

We had a short shower event last evening; however, it was short and relative humidity did not stay high for a long time.  Thus, it was not a major disease infection event, except, probably downy mildew, since it only take about 90 min under optimal condition.

Speaking of downy mildew, we have seen the beginnings of downy mildew in our experimental vineyard. Although our last application of mancozeb was only 10 days ago, rain events and humid nights probably promoted their development. 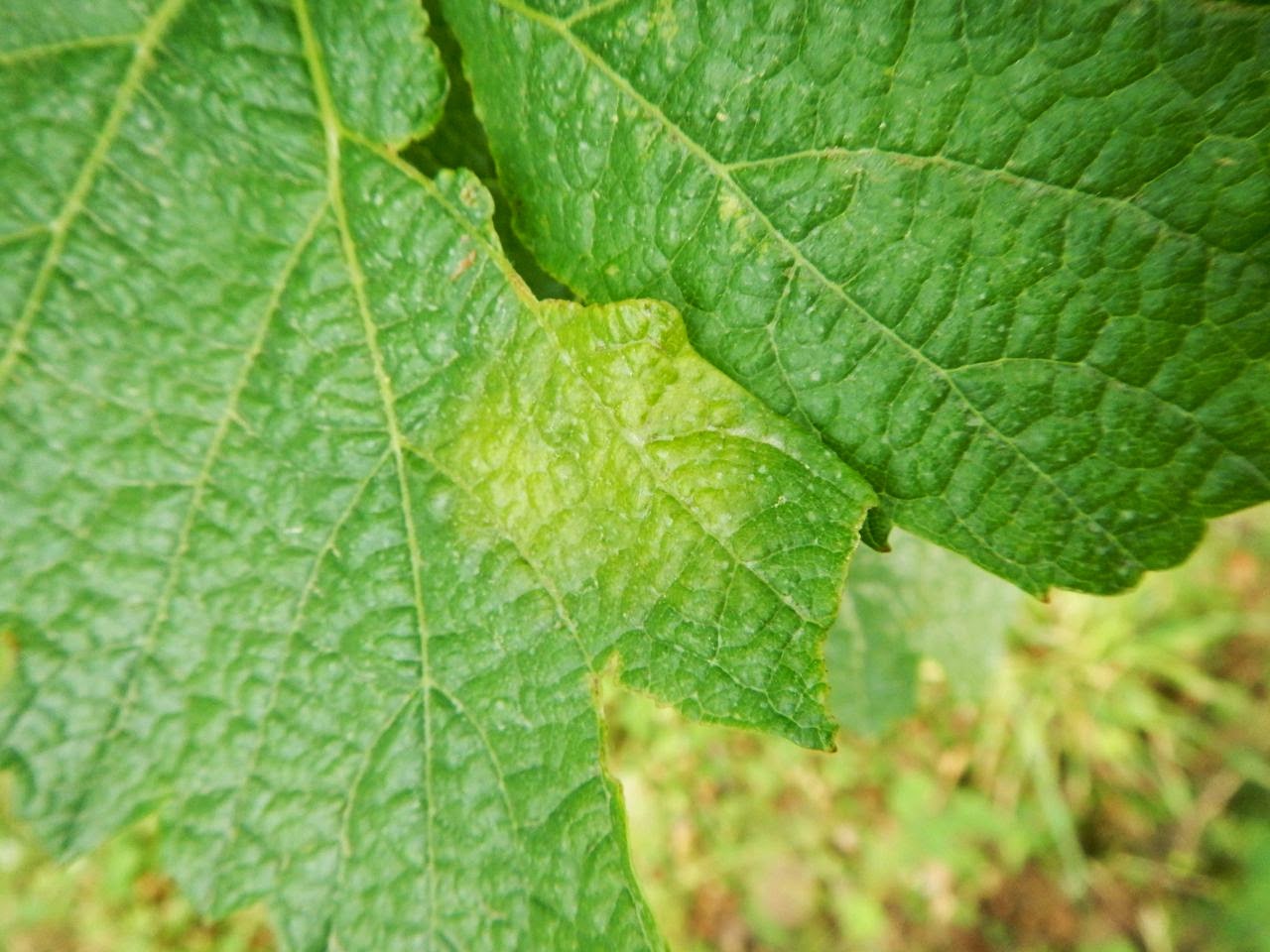 At the beginning, you will see yellow circular discoloration on upper surface of the leaf.  Please note that sometimes insect can cause similar symptoms. 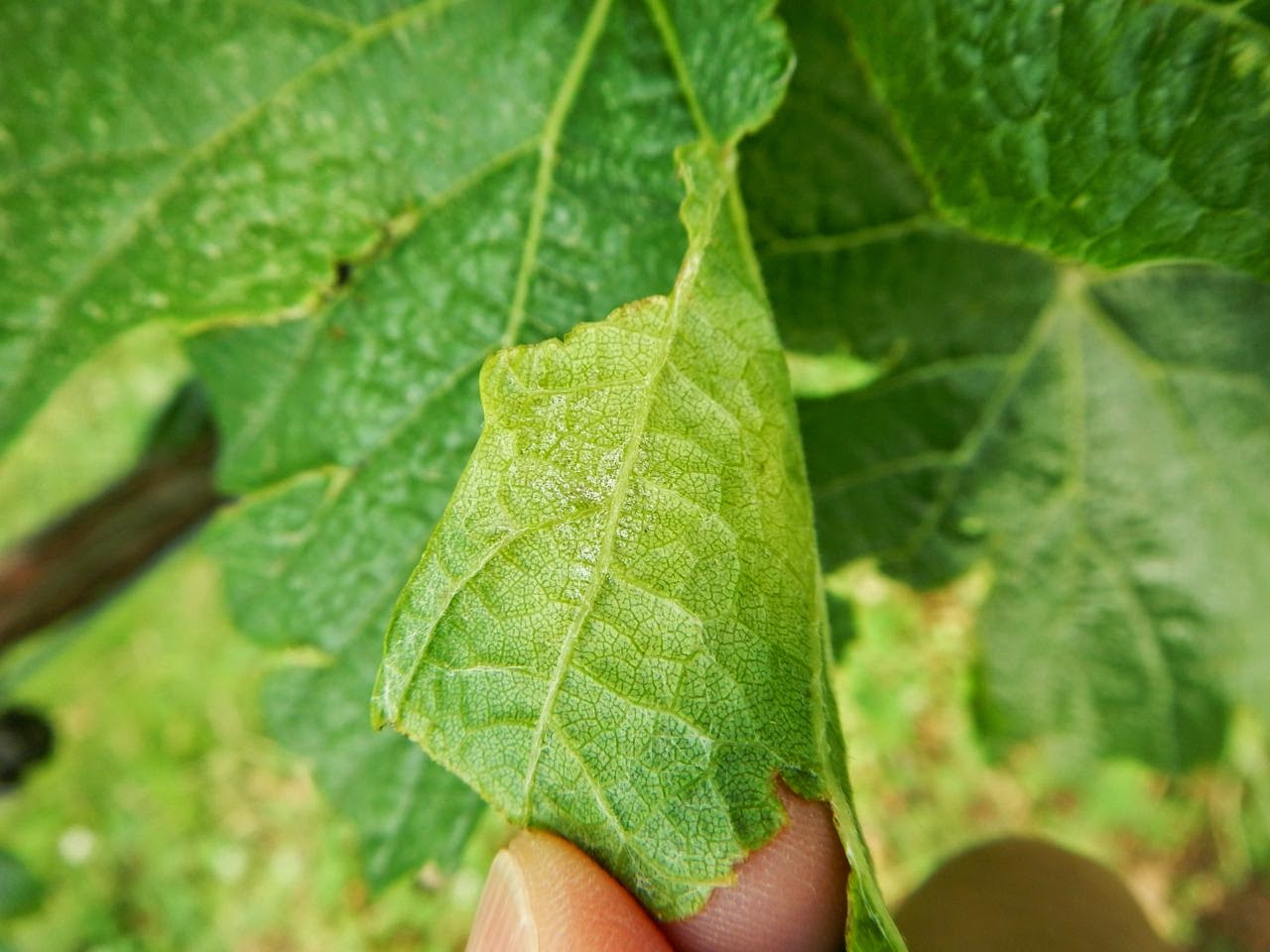 However, if you flip over, you will see tiny white growth (please click the picture to access to a higher resolution file).  This won't happen with an insect damage.

Please scout your vineyard, and if you see similar symptoms, it is probably a good idea to incorporate some of fungicides with kick-back activity.  In fact, we applied a phosphonate (Prophyt) this morning.

The other disease I have noticed in our vineyard is Phomopsis.  From the beginning of the season, we are having several cool rain events which promotes Phomopsis, and we know there is a population of Phomopsis in our older vines, so, no surprise here. 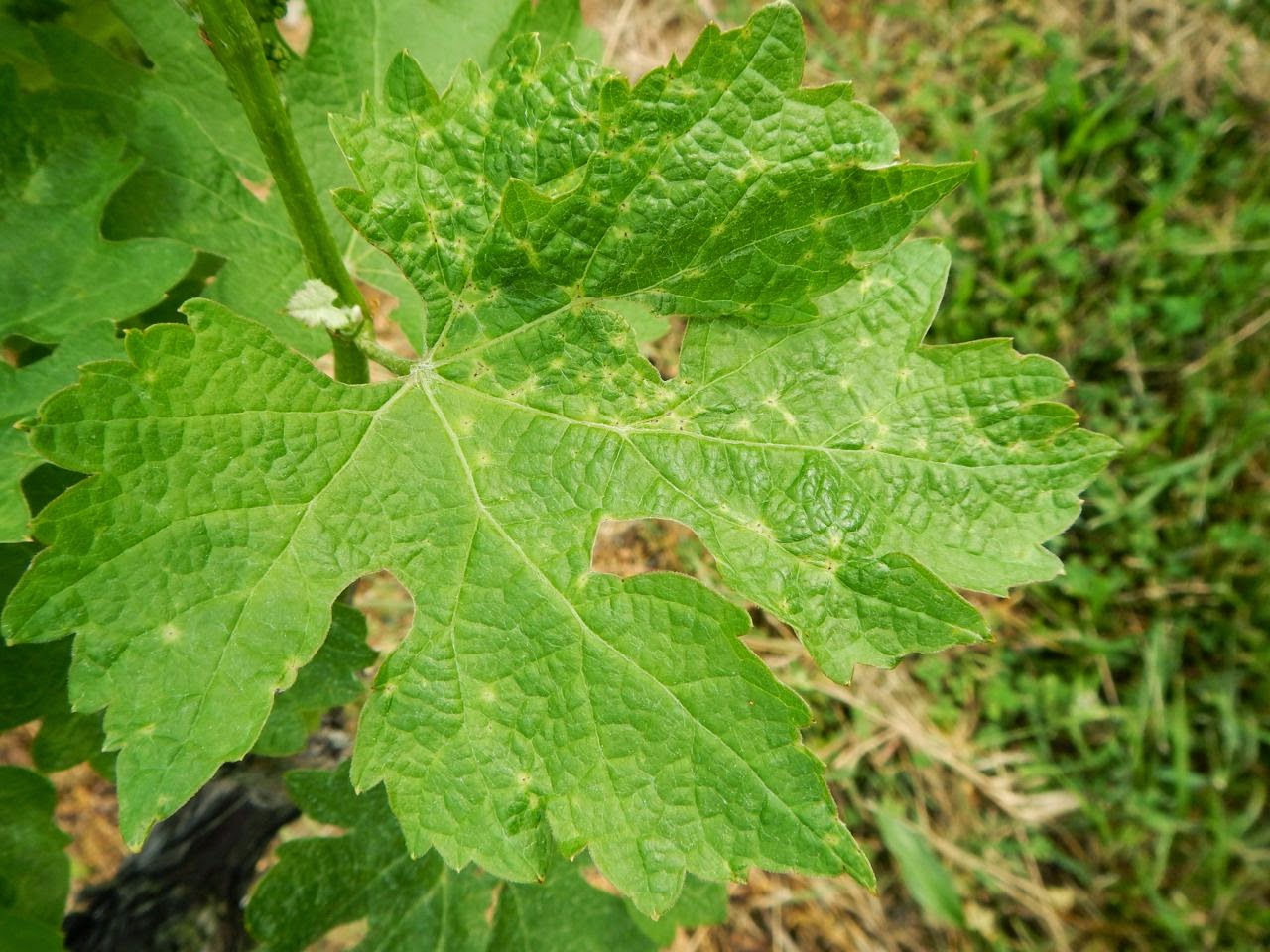 This is more or less typical symptom of Phomopsis, tiny spots on leaves, necrotic in the center with yellow halo around it. 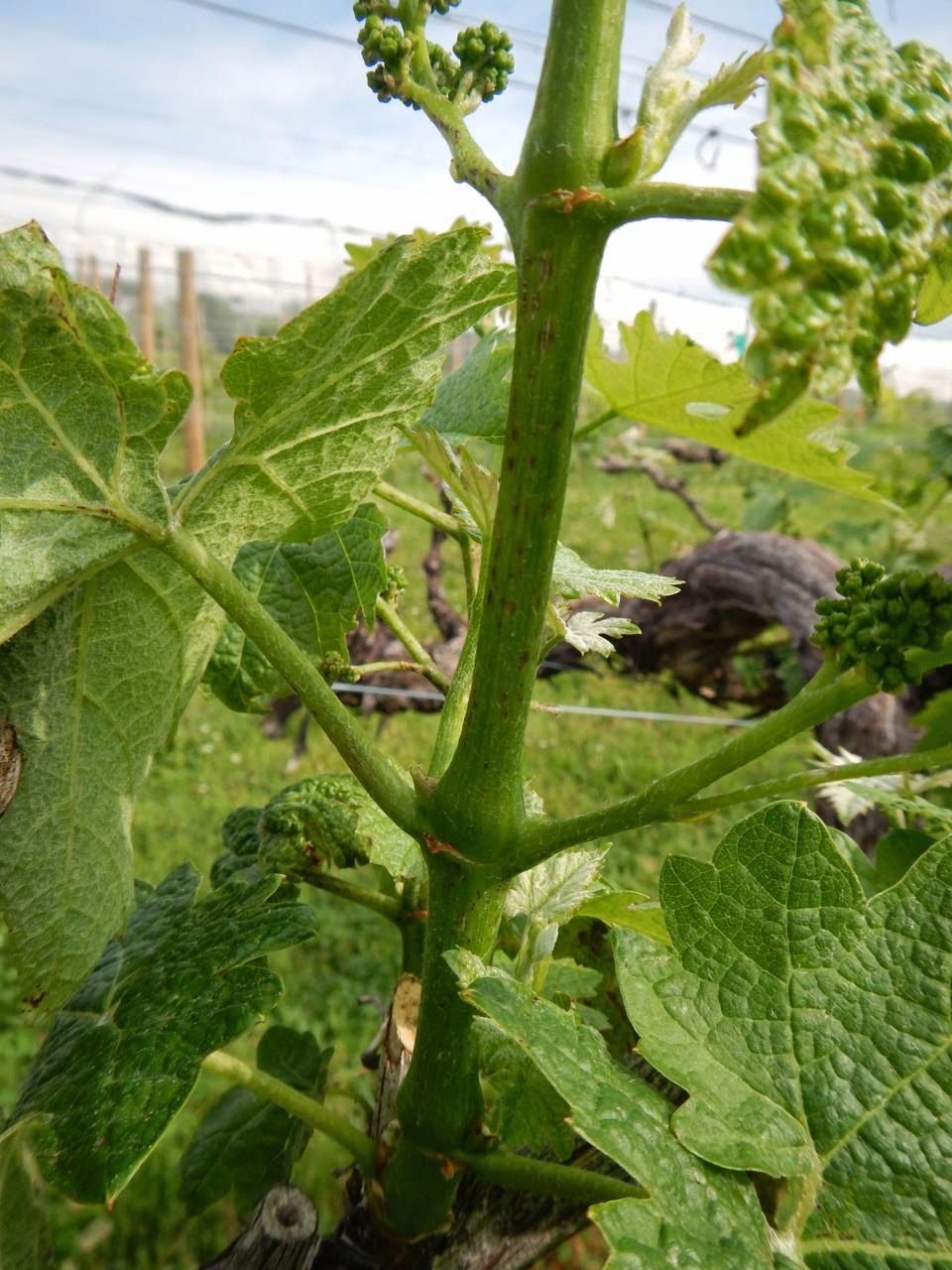 Often, you will see necrotic lesions, almost like scars, on shoots and rachis too. 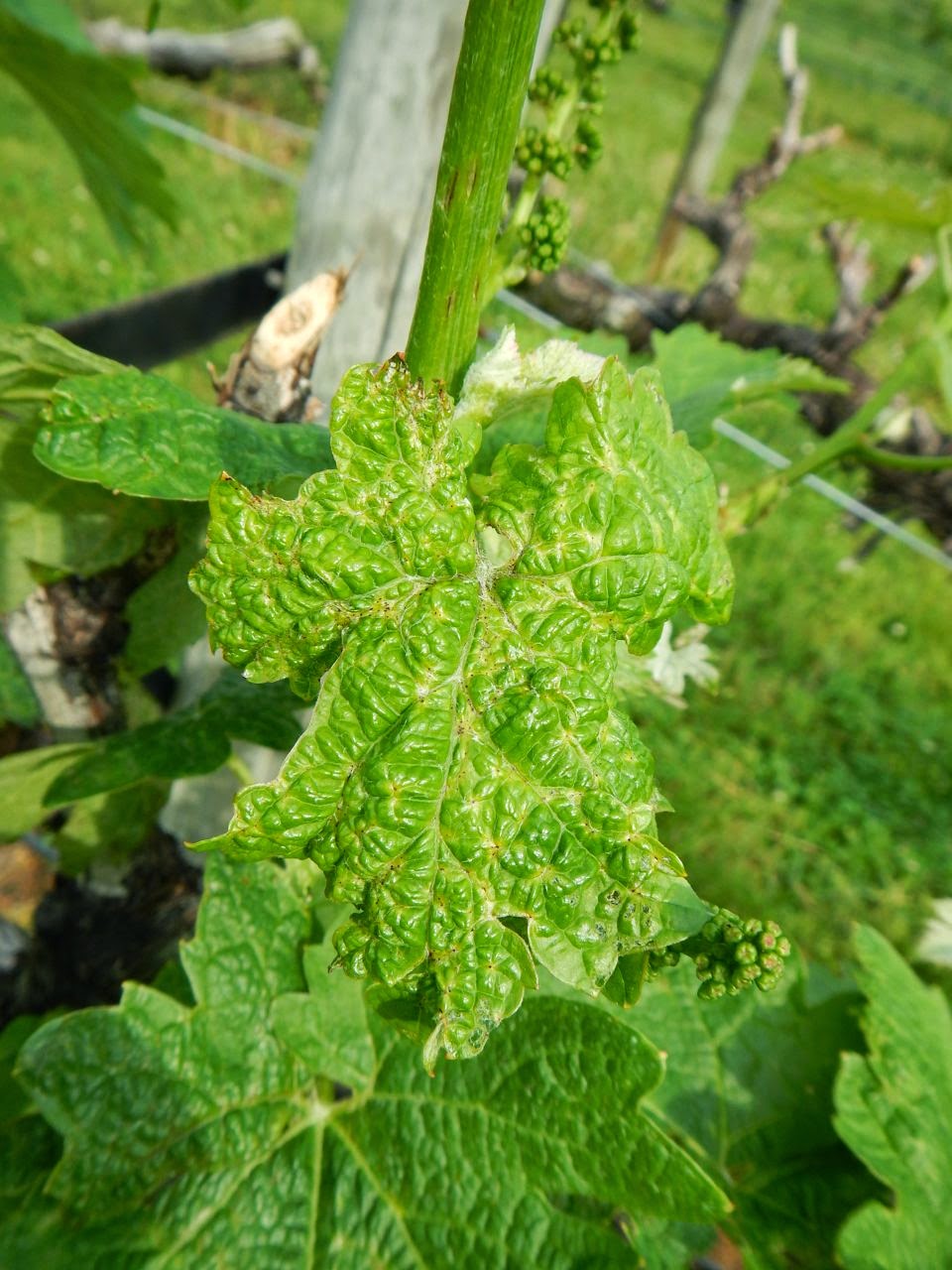 When Phomopsis gets early in the development, leaf can be deformed too. 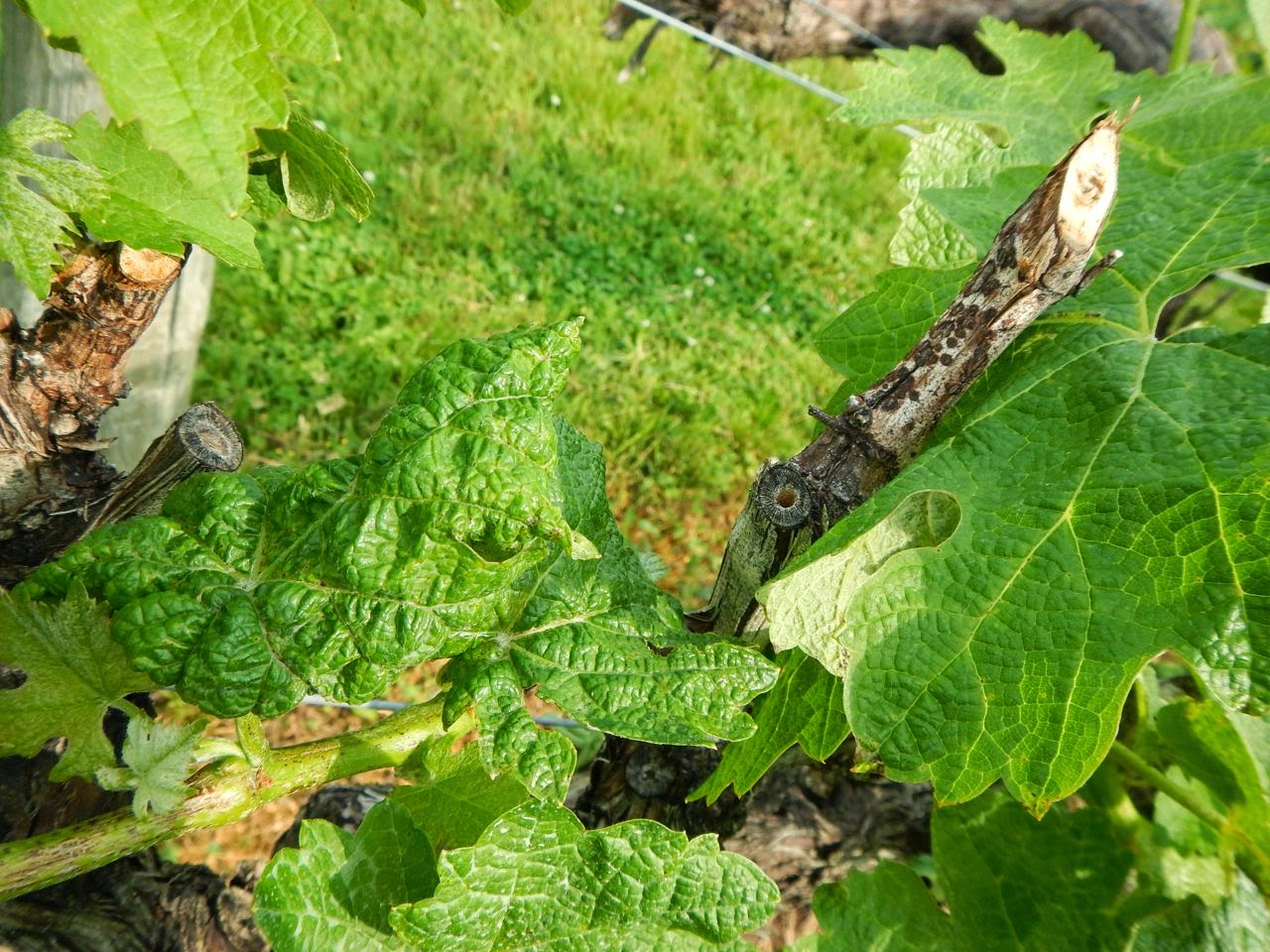 Please note the proximity between the deformed leaf and a cane (1yr-old) with lesions from last year.  Phomopsis produce spores on infected canes.  Thus, it would not be a good idea to leave apparently infected canes.  However, things happen.  For this case, we left this cane on the vine because this vine has been very weak and we did not have many canes to pick from.

There were a few isolated light showers passed around Winchester area early this morning, resulted in 6 hours of wetness with low 60's average temperature.  This was a low infection risk event for Phomopsis, but since the rain was very light one (< 0.001 inch), I would say the risk was probably negligible.
Posted by Mizuho Nita at 5:00 PM No comments:

Another thunderstorm went through Winchester area last night.  Although the first few hours were warm, the temperature dropped to low 50's during the night.  The total wetness was 15 hours and average temperature was around 55F.  It was light infection event for Phomopsis.
Posted by Mizuho Nita at 1:02 PM No comments:

A thunderstorm went though Winchester area yesterday afternoon, and since then the cloud cover kept RH very high.  So far we observed 17+ hours of wetness, and the average temperature has been in low 60's.  This event accounted for Phomopsis and black rot infection events.
Posted by Mizuho Nita at 12:05 PM No comments:

Looks like we will rains throughout the week.  Our chardonnay vines are about 1-2 inches shoot length, and we have been spraying mancozeb and sulfur this morning to provide protection against Phomopsis (+powdery mildew, sulfur at this time of the season is more like an insurance)

Rains in last week were all short ones for us, and did not result in disease event, but it looks like some people in the south saw longer rain events than we did. Please check with your local weather service.  Website such as weather underground (linked on the right hand side of this blog) let you see historical weather data at near by stations.
Posted by Mizuho Nita at 9:53 AM No comments:

50% bud-break for our Chardonnay plus Phomopsis risk 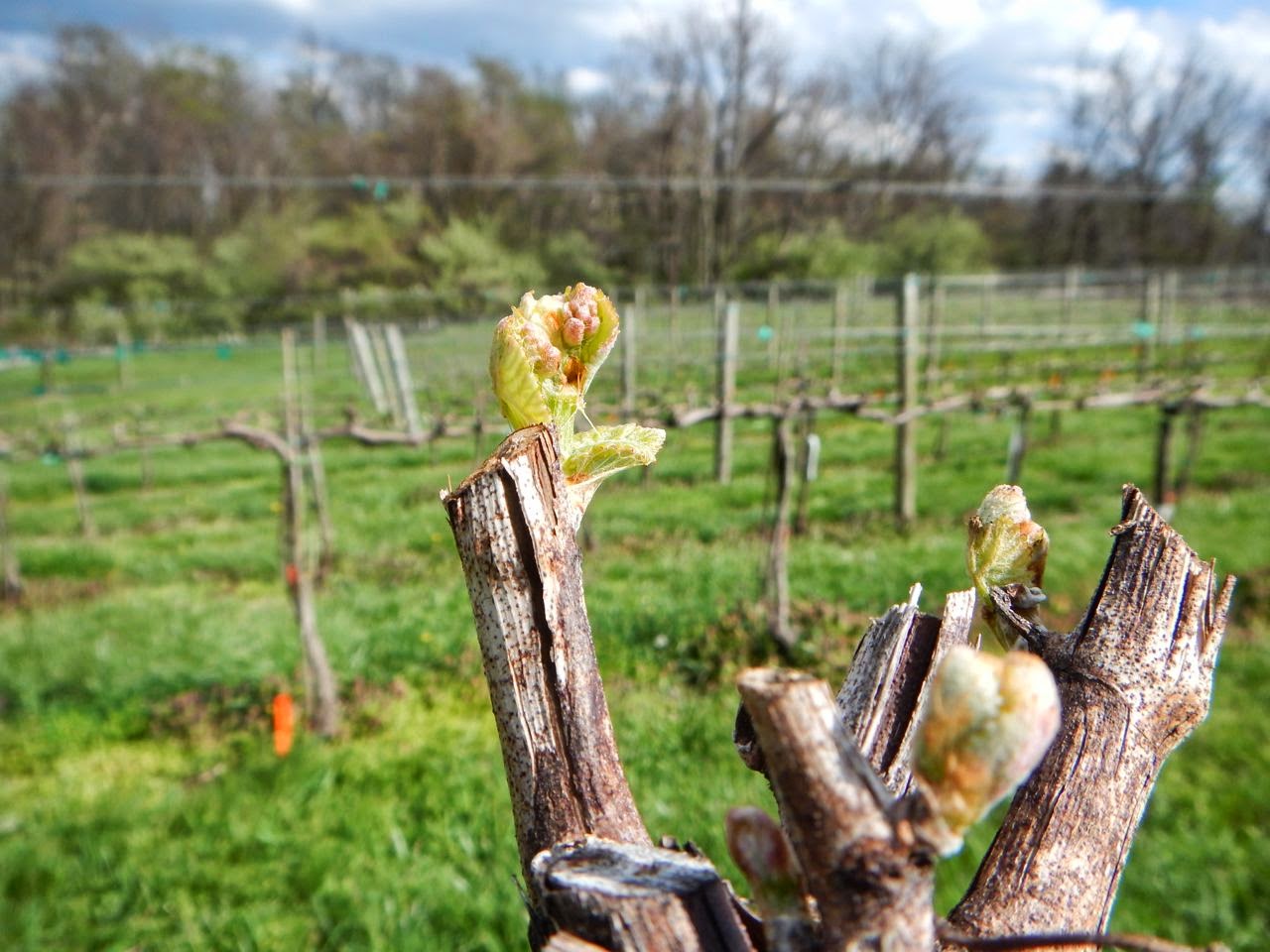 Our 5-yr old Chardonnay is about 50% bud break stage as of today.

At this time of the year, the number-one concern is Phomopsis cane and leaf spot. They produce spores on old infected cordons and trunks during the spring, and they can infect tissues even if temperature during a rain event is in 40s. Only option we have against this disease is a protective application of fungicide, such as mancozeb, captan, and Ziram. A QoI fungicide such as Abound and Pristine are also effective; however, I would recommend keeping them for the later part of the season.

Since they can be active under cold rain event, my recommendation is to protect even when shoots are about 1-3 inches long. The decision to spray for Phomopsis also depends on the history of the vineyard. The vineyard with previous history of Phomopsis tends to carry the same issue year after year.

You are probably wondering about the risk of Phomopsis from this week's rain.  At our vineyard, we received a very long (~48 hours) wetness that started in 28 April and ended in 30 April, and the average temperature was 48F. This certainly was a Phomopsis infection risk event, on the other hand, it was too cold for black rot.
Posted by Mizuho Nita at 4:37 PM 1 comment: