Disease risks from a wet weekend 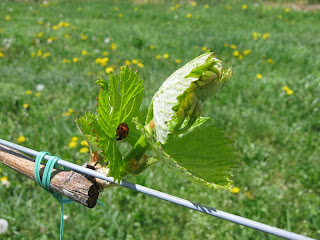 Winchester area received a series of rain event since the morning of 4/22/11.  The first event started at 9:40AM on 22nd, and lasted until 12:40PM on 23rd.  Since the relative humidity stayed above 90% until 2PM on 23rd, it was a very long event (>28 hours), but the average temperature was low (48F).  Thus, there was a low to moderate risk of Phomopsis and a very low risk of Black rot infection.  This condition was a borderline case for black rot because the majority of wet hours are in lower 40's.

The optimum temperature range for downy mildew infection is mid-60's to mid-70's, and under that condition, it takes only 90 min or so to cause infection.  On the other hand, it is relatively early in the season, and the overall temperature profile in the past few weeks may not favor the development of downy mildew.  It probably won't be the case for the most of us because 2010 was a very dry season; however, if you had a history of downy mildew outbreak in last few years, you may want to monitor your vines closely in the next few weeks.
Posted by Mizuho Nita at 12:07 PM