It was a very nice workshop! 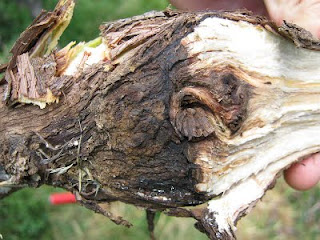 (A graft union infected by fungal organism(s))
We had a very nice workshop this Monday. Now everybody become experts of various trunk diseases! As Philippe discussed, most of fungal pathogens that cause trunk diseases often requires a point of entry. In addition to pruning wounds, accidents with a weed-whacker, etc that were in the discussion, due to cold temperature during winter, some of varieties are more susceptible to have cold injury which also can serve as a point of entry for microorganisms. Site and variety selection can play a big role in prevention of these diseases.

As for other diseases we face, we had several nights with high relative humidity (8/14-16) which favors downy mildew sporulation. Then we had thunderstorm passed by on 17th and 18th. Thus, if you had visible downy mildew colonies on your leaves, the risk of new infection was high during these thunderstorms. (I'm talking about leaf infection, not berries.) At Winchester, last night's thunderstorm did not last very long, but since it came late at night (9:20 pm), leaves were probably wet until 7:40 am or so. This accounts for > 10 hours of wetness, and the risk of Botrytis would be high during this time.
Posted by Mizuho Nita at 9:42 AM

Please leave your comment here. In order to avoid spam messages, I'll moderate comments, thus it may take a few hours for your comment to be posted on the page.