Our low was low 40's this morning. It suppose to be warmer tomorrow and I hope that we do not get any frost damage. We'll see.

We received several disease samples today which I'd like to share with you. The first one is crown gall. This is caused by a bacterium called Agrobacterium vitis. This gall formation is due to genetic modification caused by the bacterium to the infected grape vine. Sometimes it is only a cosmetic damage, but the gall tissue could girdle the vine and restrict the movements of water and nutrients, then results in the death of the vine. 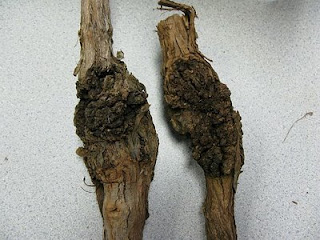 There are some chemicals and biological agent available against gall formation and prevention of the disease, but as far as I know, none of them are very effective as you would expect from other chemical treatments such as fungicides. Removal of the infected vine and then replacing with a certified vine is the common method of management. However, you need to keep in your mind that this bacterium can survive in infected roots and soils up to 5 years. (This bacterium causes a systematic infection, thus if you see the gall, the bacterium can be in roots.) Some of grape phylloxera resistant rootstocks (3309C, 101-14, Riparia Glorie, etc) are known to tolerate the disease.

The other sample is our old friend Phomopsis, caused by a fungus Phomopsis viticola. The first picture shows the case when the rachis is infected. With three weeks of rain after rain, this year has been a Phomopsis year so far. 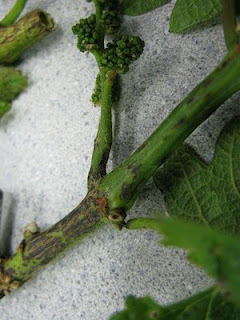 And the one on your left in this picture is showing splitting of epidermal cell which is also associated with Phomopsis infection. 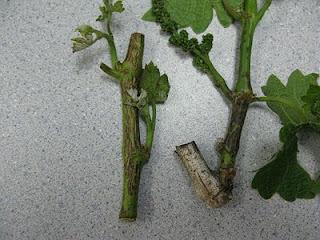 Unfortunately, we do not have fungicide with a curative activity against Phomopsis on grape. Thus, once the damage has done, nothing much you can do about it to fix it. (You can remove infected shoots at your shoot thinning, though.) You need to remember next spring to protect new growth because the old infected woods can produce spores for 2 years or more.
Posted by Mizuho Nita at 5:58 PM