Recent rains and more rains in the forecast made me think of downy mildew. Let's take a look at what the NEWA DMCast model says about downy mildew risks from the past two weeks.

There were six DM risk events, including one that happened today.

(Note: we have a new weather station in Bristol. You can check the weather data, but the DMCast model is not working yet. I notified the NEWA about the lack of DMCast outputs.) 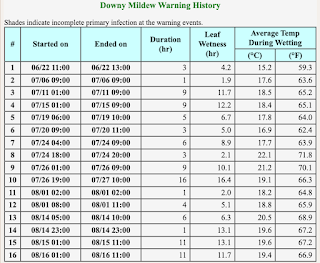 There were four days with downy mildew risk event(s) since the beginning of the month.
Red Hill

There were four days with downy mildew risk event(s) since the beginning of the month.
Washington, VA

There were nine days with downy mildew risk event(s) since the beginning of the month.
Winchester, VA

There were five days with downy mildew risk event(s) since the beginning of the month.
It looks like there were more downy mildew risk events as we move northwards. Also, recent warm and humid nights can promote the downy mildew pathogen to produce spores.
According to today's Sentinel Vineyard Group meeting, some growers noted downy mildew, but many growers in the central VA mentioned that their vines have been clean so far.
If the harvest is coming within 10 days or so and if your vines are very clean, you may not need to take any action. If the harvest is about two weeks away, it is probably a good idea to have at least a phosphorous acid. The decision also depends on what cultivars you have. I would be more careful with downy-mildew-susceptible cultivars such as Chardonnay and Vidal.
If there were more than two weeks until the harvest, I would consider a tank mix of a protective material and a phosphorous acid. Both Revus and Zampro have a 14-day PHI and Captan and Copper have a 0-day PHI. Please note that we have several cases of Revus resistant downy mildew isolates in VA. Also, many winemakers prefer not to see either captan or copper sprayed within 3-4 weeks of harvest.
Moreover, with more rains coming this week, you may want to consider protection against Botrytis and ripe rot. many of our reds are about to finish veraison, and we often protect berries against these two diseases around veraison. As usual, it will depend on the cultivar, environment, and history, so, please make a decision to match your site(s).
This is a link to my previous post about short-PHI material. For ripe rot, Switch, QoI (Abound, Flint, etc), tebuconazole, or captain are current recommendations. If your vineyard has a history of ripe rot, make sure to mix two modes of action.

March 24, 2021
Updated: Links below are for the 2021 edition of Pest Management Guides. The first one is for home gardens, and the second is for commercial productions. I asked them to provide by chapter (= crop) and they made changes. :) 1) Visit the page by clicking one of the links below. (It is rather a slow page. Please be patient.) 2) Scroll down until you see "Links to individual chapters." Grapes are chapter 3 for both Home (Home Fruits) and Commercial Crops (Grapes) 3) Once you get to the site, click "PDF", then "Preview", and it will open a new window.  4) Scroll down a bit, and click "Download Version" to download the file to your computer.  2021 Home Grounds  Pest   Management   Guide 2021 Horticulture and Forest  Pest   Management   Guide
Post a Comment
Read more

Prepare for a potential rain event for this weekend.

August 24, 2020
Looks like a tropical storm Marco is moving westward, but Laura may hit our areas during this weekend. The current forecast shows (opens a new window with a link to Weather.com) potential movement to Virginia and surrounding states around this Saturday (8/29). Many white cultivars will be either ready to pick or getting very close to harvest, and red cultivars may have several weeks to go, depends on where you are what you grow. At this point in the season, the target diseases are late-season fruit rots (Botrytis, ripe rot, bitter rot, etc.) and downy mildew (on leaves). For whites, it may be a decision of when to pick, but not what to spray. If you decided to wait until the storm is over, there are several materials with a very short PHI that you may want to consider, such as Oso/Ph-D or Elevate for Botrytis and a phos acid for downy mildew. FYI: when we tested in the field, Oso plus Double Nickel combination worked well against sour rot. For reds, it will depend on when and what you
Post a Comment
Read more

August 14, 2020
With recent rain events and warm and humid nights, the risk of downy mildew and Botrytis are probably high in many areas of Virginia. For example, I counted seven days (at Winchester, VA) and eleven days (at Rustburg and Scottsville, VA), with downy mildew infection events in the past two weeks according to the NEWA model ( http://newa.cornell.edu/ ). It is very important to keep your vines protected, and if you think you need to have a kick-back activity against downy mildew to counteract the recent rain event that your previous spray might not have provided good coverage, add a phosphorous acid material such as Prophyt or Phostrol.  Please refer to this list of materials with short PHI since some of the cultivars are getting very close to harvest. Note: although both sulfur and copper have a short PHI, we typically do not recommend spraying these materials within 3-4 weeks of harvest due to its potential negative impacts on the fermentation or wine quality.  When some of us ended up
Post a Comment
Read more