Once again, our recent conditions (warm and humid nights) are favoring downy mildew pathogens to produce spores.  Please keep eye on younger leaves (upper part of the canopy) to catch their early development.  Severe downy mildew infection can cause defoliation, and you do not want to that to happen at this time of the season.

Also, these extensive humid conditions also call for Botrytis and other late season rots.  Canopy management to promote air circulation and bird management can be a very useful tool to deal with late season rots.  That also reminds me to mention about Spotted wing Drosophila (SWD).  We do have some isolated cases of SWD in VA vineyards this year.  Please keep eye on this newly introduced fruit fly.  If you have a concern on SWD, please contact Dr. Doug Pfeiffer (dgpfeiff@vt.edu).
Posted by Mizuho Nita at 1:46 PM No comments:

We received a showed yesterday afternoon, and it resulted in about 7.5 hours of estimated wetness duration with an average temperature of 65.5F around Winchester area.  It was an infection event for downy mildew and Botrytis, and it was a potential infection event for black rot and Phomopsis (Note: these two diseases are of relatively minor importance at this point of the season).  Once again, I see the risk of downy mildew remains high.  Please scout your vineyards (especially for younger leaves) often to catch early development of downy mildew.

(note: the East of us received a considerable rain over the weekend, but we did not. i.e., other Northern VA area might have one more risk events.)
Posted by Mizuho Nita at 11:19 AM No comments:

Yesterday's shower brought about 7.5 hours of estimated wetness duration with an average temperature of 71F around Winchester area.  It was an infection event for downy mildew and Botrytis, and it was a potential infection event for black rot and Phomopsis (although these two diseases are of relatively minor importance at this point of the season).  Once again, I see the risk of downy mildew remains high.  Please scout your vineyards (especially for younger leaves) often to catch early development of downy mildew.

Around this time of the season, I am often asked about the potential impact of a fungicide application on wine quality.  There were several studies where authors detected chemical residues on the must.  It is often practiced to avoid application of sulfur and copper 3-4 weeks prior to the harvest.  It would be relatively easy to do when we have a dry condition, but sometimes (like in 2011), we may just need to do whatever we can to secure yield.  For example, a good air circulation (= canopy management) around clusters is very important.  For late season rots (sour rot, ripe rot, Botrytis and other general rots), captan is often used, and Switch is labeled for both Botrytis and sour rot.

If your concern is downy mildew or powdery mildew, you can also spray only on foliage (i.e., avoid spraying fruiting zone by closing nozzles), since your berries have developed resistant.

Posted by Mizuho Nita at 4:00 PM No comments:

Since last week, we are having several nights where relative humidity is very high (>90%) (e.g., 8/9-10, 8/13-15).  This condition favors downy mildew fungus to produce spores.  Unlike others, this pathogen can cause disease after a short rain (90 min at optimum conditions).  Thus, some of short showers we are having here and there this week may be long enough as an infection event for downy mildew.  For example, yesterday's short shower event was probably long enough for downy mildew to spread.  Also, please keep in mind that these showers are often geographically nonuniform and you might have had a longer wetness event.

At this point, a phosphonate (aka phosphorous acid, such as Prophyt) is a good option to control downy mildew.  Some people prefer to include captan to add more forward protection.  The target of this late season application is to keep foliage healthy in order to help berries to mature, and also to accumulate carbohydrates for winter survival.  Your berries are not susceptible to downy mildew at this point.
Posted by Mizuho Nita at 8:44 AM 2 comments:

There was an estimated leaf wetness event occurred Aug 5-6 with 13 hours with an average temperature at 73° and 0.41 in. rain.  It was an event for downy mildew and Botrytis (+ Phomopsis and black rot).

(Sorry for the delayed posting.  I am at a conference.)
Posted by Mizuho Nita at 4:23 PM No comments:

Yesterday's storm brought more than 2-inches of rain, and resulted in approximately 12.5 hours of wetness with an average temperature of 69F.  It was an infection event for downy mildew and Botrytis (and Phomopsis and black rot, but they are less important at this time of the season, unless you have on-going Phomopsis issue).

The other thing yesterday's storm brought was hails.  We saw a minor, but obvious damages from the hail.  Often time you will see random holes on leaves, clacks on berries, and sometimes, necrotic scars on canes.  Please see the pictures below. 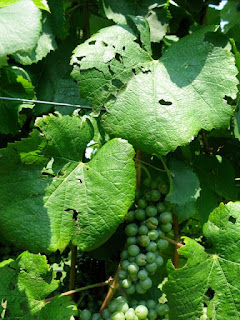 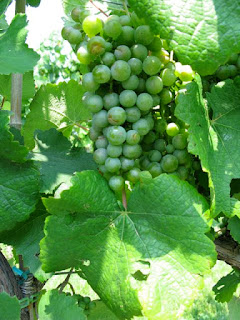 The question is what will be the consequence of these wounds on berries.  It depends on a few factors.  If we have a nice hot day like today, these damaged berries more likely to be dried out; however, if we have another prolonged rain event, it can introduce Botrytis and other late season rots.  It may also depends on how much sugar is available on these berries.  The more sugar they contain, the higher the risk of rot pathogens to come in since some of them like high sugar environment.  If you have a risk of rots, you can consider applying captan and/or one of Botrytis materials. 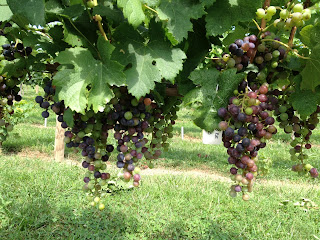 Our Merlot and Chardonnay hit veraison over the weekend.  We placed bird netting and thinking about to spray for Botrytis, and here we received a strong storm followed with a long wetness period.  I will update once this wetness period finishes.
Posted by Mizuho Nita at 6:47 AM No comments: