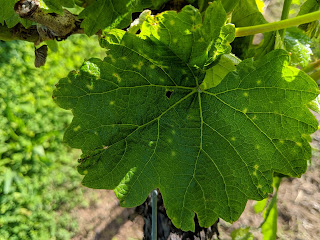 It looks like our Chardonnay buds are swelling, which probably means that growers in the south and central Virginia either start to see bud break. Then the forecast is calling for rains next week. I guess it is a typical Virginia spring.

One of the diseases you need to consider soon after bud break is Phomopsis cane and leaf spot. It causes minor leaf spots, which are more evident to our eyes, but necrotic lesions cause more critical damage on shoots and rachis. It also causes berry rot; however, it is not common with wine grapes because of our spray programs. Some cultivars, such as Viognier, Cabernet Sauvignon, and Seyval Blanc, are more susceptible to Phomopsis than the others. 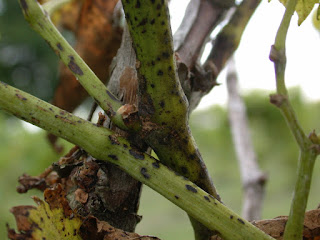 Phomopsis spores can cause infection requires water, and Phomopsis spores can germinate in a relatively cooler environment (the upper 40s). This pathogen tends to produce spores in spring from previously infected canes and cordons. Thus, springtime rain events are ideal for the development of Phomopsis. It is vital to protect young tissues when they come out from the older canes and trunks because we do not have any curative fungicides against Phomopsis.

If rain events are coming into the picture after bud break, mancozeb (FRAC = M3, Penncozeb, Dithane, Manzate, etc.), Ziram (FRAC = M3), and captan (FRAC = M4) are useful protective materials against Phomopsis. Since shoots will proliferate quickly, you may need to spray several times against Phomopsis, depending on how much rain we receive. One or two applications, starting from 1 to 2 inches shoot length and repeated seven to ten days apart, is sufficient in a typical year. After that period, your downy mildew or black rot applications, which happens in the late spring, most likely cover Phomopsis.

QoI (FRAC = 11), such as Abound and Pristine, as well as SDHI (FRAC = 7), such as Luna Experience, Miravis Prime, Aprovia, and Aprovia Top are effective too. However, you probably don't want to use them this early in the season because you will need these materials for the latter part of the season to control other diseases (e.g., ripe rot and bitter rot).

The other disease that you may need to consider around this time of the year is anthracnose, which is more common with a certain hybrid species. Typical symptoms are black necrotic lesions on leaves, shoots, and fruits, and often, the black lesion has an ash-colored center, as if you burnt the leaf or shoot tissue with a cigarette. The management strategies will be similar to that of Phomopsis, and in addition to the list above, Topsin-M (FRAC = 1) is also known to be effective. 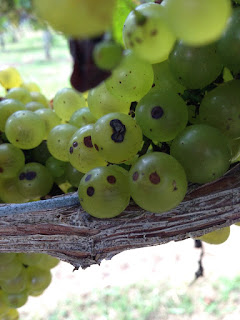 Prepare for a potential rain event for this weekend.

August 24, 2020
Looks like a tropical storm Marco is moving westward, but Laura may hit our areas during this weekend. The current forecast shows (opens a new window with a link to Weather.com) potential movement to Virginia and surrounding states around this Saturday (8/29). Many white cultivars will be either ready to pick or getting very close to harvest, and red cultivars may have several weeks to go, depends on where you are what you grow. At this point in the season, the target diseases are late-season fruit rots (Botrytis, ripe rot, bitter rot, etc.) and downy mildew (on leaves). For whites, it may be a decision of when to pick, but not what to spray. If you decided to wait until the storm is over, there are several materials with a very short PHI that you may want to consider, such as Oso/Ph-D or Elevate for Botrytis and a phos acid for downy mildew. FYI: when we tested in the field, Oso plus Double Nickel combination worked well against sour rot. For reds, it will depend on when and what you
Post a Comment
Read more

August 14, 2020
With recent rain events and warm and humid nights, the risk of downy mildew and Botrytis are probably high in many areas of Virginia. For example, I counted seven days (at Winchester, VA) and eleven days (at Rustburg and Scottsville, VA), with downy mildew infection events in the past two weeks according to the NEWA model ( http://newa.cornell.edu/ ). It is very important to keep your vines protected, and if you think you need to have a kick-back activity against downy mildew to counteract the recent rain event that your previous spray might not have provided good coverage, add a phosphorous acid material such as Prophyt or Phostrol.  Please refer to this list of materials with short PHI since some of the cultivars are getting very close to harvest. Note: although both sulfur and copper have a short PHI, we typically do not recommend spraying these materials within 3-4 weeks of harvest due to its potential negative impacts on the fermentation or wine quality.  When some of us ended up
Post a Comment
Read more

July 23, 2020
Central and northern VA received much-needed rains in the past two days. Looks like the chance of thunderstorm is high in today and tomorrow too. Several people asked me whether they need to jump on their tractor now and spray for downy mildew or not. Here are snapshots of downy mildew risk events in three locations during the past two weeks. Southwestern VA, Floyd: none Central VA, Afton: 7/11, 7/22, and 7/23 Northern VA, Winchester, 7/11 (a very short one) and 7/22 Since we have been experiencing a very dry season, I do not think we need to react to every rain event, especially if your previous spray was less than 7-10 days ago . If you are due to spray soon anyway, it may be a good idea to have a Phos acid material (e.g., Prophyt, Phostrol, Agri-Fos, etc.) in the tank-mix as insurance. For example, my previous spray (a fixed copper material) was on the 11th and my plan is to spray my vines this Saturday (the 25th) with a Phos acid, sulfur, and another PM material (Vivando,
Post a Comment
Read more